Each year The Ohio American Legion Baseball Commissioners host a great state tournament and 2019 was no exception. Regarding the competition, Coach Al Beavers who has participated in more than 20 tournaments exclaimed, "This is the best tournament play I've seen in 10 years! All the teams were evenly matched and competitive. Often one team will go through undefeated. But this year, many of the games could have gone either way."

6 of the 15 games were decided by 3 runs or less, with multiple come-from-behind victories and a couple of those in the final inning. All 8 teams demonstrated continual fight and grit, and not one team got through the tournament unscathed by loss. This year's champ, Beverly-Lowell Post 389/750, was handed a loss by returning state champ, Circleville Post 134, in the Friday evening night-cap. Circleville was eventually eliminated by new-comers Sidney Post 217 in game 12, who was then eliminated by Beverly-Lowell in game 14. The final, played on Sunday 8/4, included a match-up between Beverly-Lowell and new-comers Wayne County Post 68. Beverly-Lowell topped Wayne County 7-1 to take the coveted 2019 Ohio ALB State Championship.

When asked about the tournament, Beverly-Lowell Coach Todd Engle stated, "It was a team win. Our entire line-up was hitting and guys in our 5 - 9 holes were getting on base and we had timely hits across the board. When playing new teams you never know what you'll get into and we work hard to speed up the other team. Then, sometimes, the ball just bounces your way." Coach Engle also noted the strong pitching performances from his staff. "We got long outings from a couple of our young guys. They stepped up and when that happens, you're in a good position to win."

This is Beverly-Lowell's second state title (2006, 2019) and 10th district title in the last 13 years. But more than the wins, what Coach Engle stressed about this year's team is their closeness. "These kids enjoy being together! If we don't have something on the schedule, they'll ask to practice just so they can be together." He also noted how special the state tournament is; "The tournament and facility are special. The kids know when they come here they are getting to do something special. Helps them to feel special. And we're happy we get to continue the experience at the Regional."

The 2019 Ohio American Legion Baseball (ALB) State Tournament festivities started Tuesday, 7/31 at the Lead-Off Dinner and Banquet. The banquet an annual event is where the 8 legion teams from across the state who qualified for the tournament meet to mutually celebrate their accomplishments and to reflect on the opportunity to play American Legion Baseball.

Immediately, it is recognizable that this banquet is not like typical sports banquets. The Lead-Off Dinner and Banquet is opened with prayer that gives thanks for the opportunity to meet, to get to play ball, and asks our Lord for blessings on the kids, the teams, the leaders, our service men and women, and on our country. Everyone recites the Pledge of Allegiance. All the players recite the American Legion Baseball Code of Conduct, something that is also done before each tournament game.

This year's featured speaker was Fred Gibson, long-time Athens area coach. Coach Gibson coached basketball for 42 years and Athens Post 21 ALB for 7 years. He has a total of 536 wins: 337 basketball wins and 199 baseball. He led Athens Post 21 to the coveted state title in 1990 and in years prior led teams to the Little League World Series in 1987, including 3 trips to Little League Regional. He is also the announcer for the State ALB Tournament at Beavers Field.

In his speech, Coach Gibson impressed upon the audience the significance of American Legion Baseball. Similar to many coaches that have been around ALB for any significant time attest, Coach Gibson proclaimed, "American Legion Baseball is the best summer baseball program in the country. Every team here had to earn its way in. You didn't have to have the biggest budget and you didn't pay your way in, you had to compete."

Another recurring theme in Coach Gibson's speech was the competitiveness of Ohio ALB. "If you can win Ohio, you can win the Regional.", stated Coach Gibson. And that statement was proven correct this year by Beverly-Lowell's success and their demonstration of how competitive ALB is in Ohio.

Similar to previous years, the 2019 Ohio ALB State Tournament drew a lot of people and press to the game. To see the 8 teams compete, 25+ college coaches attended for recruiting opportunities - a regular occurrence at any ALB tournament, 3 different radio stations - one an ESPN affiliate, an NBC television affiliate from South Eastern Ohio, and no less than a half dozen newspapers reported on the games and conducted interviews. For Wednesday's nightcap game between Lancaster Post 11 and Beverly-Lowell, 500+ were in attendance and for the Friday winners bracket championship between Beverly-Lowell and newcomers Wayne County, 750+ fans were in attendance. It's not too often that a young man gets to play in front of that many spectators, even at the college level. It is an incredible experience! Overall for the 5 day tournament, approximately 7000 fans came to Beavers Field in Lancaster to watch American Legion Baseball.  It was a bustling place. And we can't fail to mention, 270 Phyllis Burgers were served to happy fans from Phyllis' Home Plate!

Each year Ohio ALB and Beavers Field looks to expand their service to the ball players and this year included significant advancements in social media exposure. All of the games this year were lived streamed through Beavers Field Facebook and received regular Tweets with video and radar statistics. Here are some stats from the social media exposure for the players during the 5 day tournament:

With all the platforms directly associated with the tournament, including Post 11 Twitter, there were 215,555 views! A remarkable amount of exposure and support for the young men playing Ohio ALB. 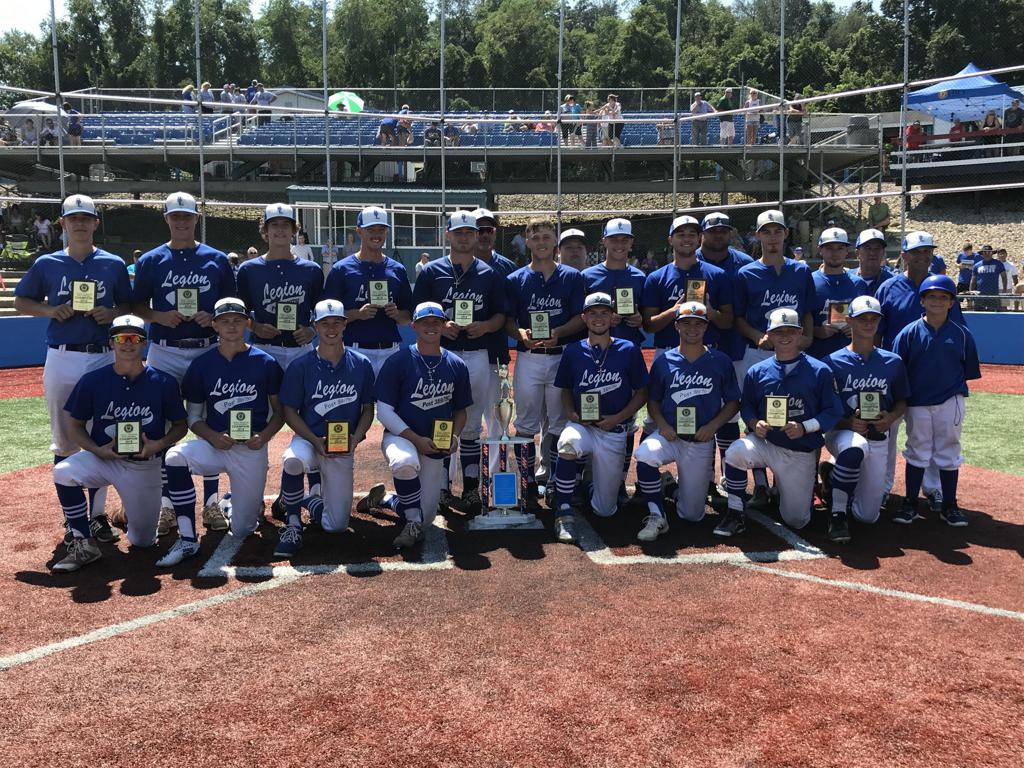 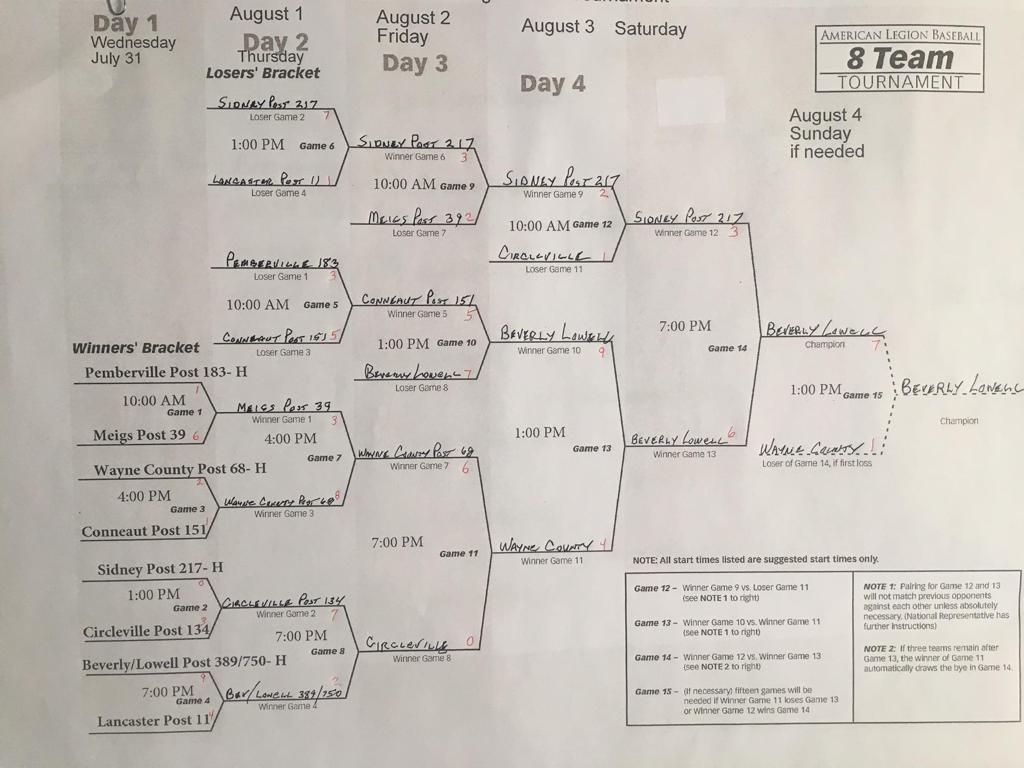