Congratulations to Trey "Treydog" Henry (FUHS, 2019) for continuing his academic pursuits and college baseball career at Ohio University - Lancaster. The Cougars of Lancaster participate in the Ohio Regional Campus Conference (ORCC). The ORCC is an independent sports organization founded in 1973 to serve the athletic teams from regional campuses of large state universities including Ohio University, Ohio State, Akron and Miami. It is a very competitive league and teams often supplement their ORCC schedules with games against Junior Colleges and NCAA Div III teams.

Going to college and playing baseball is a big deal for anyone, and Post 11 is very proud of Trey and happy for him. He has certainly worked hard and deserves it!

Trey contributed to the 2019 Senior team's success as the starting CF, as a 1st baseman and occasionally from the mound. Trey was a workhorse; he played in 48 of 51 games, tied as the team leader in runs scored at 36, landed toward the top in OBP at .424 and FP at .959. Get this: Trey played a whopping 280 innings this summer!

More importantly, Trey was an exemplary teammate, competitor and relentless at getting better. He celebrated his teammates' victories and constantly looked for ways to increase his contributions to the team and to improve his game. Trey mastered the concept of 'immediate feedback'. For example, he could see and hear how the ball came off his bat and then understand any changes needed to better square up the ball and to hit it harder. He played with confidence, focus and was intent on getting the job done to help his team win. Trey was also very conscientious. He needed to ask, or be asked, only once regarding an action, and you could then bank on it without another thought that Trey would get it done.

You'll see Trey's exemplary attitude and work ethic shine through in his interview below. It's a great read. You'll also see Trey's deep consideration in his decision to go to college and play baseball. Trey understands that there is a lot at stake when selecting a college and calls out the need to make sure a school is the right fit - and not just a good athletic fit. Similarly with his game-play and team orientation, Trey sets an example in his decision process for selecting a school.

Here is a link to Ohio University - Lancaster. Check it out: https://www.ohio.edu/lancaster/studentlife/baseball.cfm.

Which college are you attending and what's your major? Ohio University Lancaster, majoring in Sports Management

How does it feel to know that you’re going to college and why? It's exciting to know that a new chapter in my life is starting. I know that there may be some ups and downs and that things may be hard at times, but I am excited to see what the future holds.

What is your favorite thing about the college you chose and why? I like the environment and the faculty. I know that it is a nice learning environment and everyone will help you succeed.

How will you approach walking-on to your college baseball team? It just means that I need to work harder than the rest. I know that I will not let anyone out work me. I wish to make a big impact and improve the aspects of my game. I feel that I need to come in and play my game and things should work out. I'll just put in the work and I'm excited to see the results.

How do you see yourself contributing to your new college baseball team? I feel like I can contribute in various aspects with my fielding and ability to cover ground, as well as getting on base and using my speed.  My knowledge of the game and attention to details has always helped me as well.

What do you know about your new coach? And, how will you go about getting to know him and his staff and what they expect of a new team member?  From everything that I have heard he is a great coach and an even better person. I will speak with him and the staff quite often to gain a better bond. He has made it known that he will treat us as the college baseball players that we are and will communicate with us whenever is necessary. It is nice to know that he is someone that we can go to if we need to talk about things. He wants the best for each of us, which will result in the best for the team.

What do think will be the most challenging about college baseball? I think the most challenging thing about college baseball is just the competition. The good competition between the members on the team fighting for playing time and the good competition between other schools.  There are no days off. You can never go into a practice thinking that you'll go through the motions, because you will lose your spot and if you go into a game situation just going through the motions, you will not win that game. Someone is always working to be better than you.

How does it feel knowing your high school / summer baseball career is completed and how do you think it helped prepare you for college baseball?  It is kind of sad to think about not playing with any of those guys again. I had great experiences through high school ball and in my summer ball with Lancaster Post 11. I know that those seasons have prepared me for college baseball and I am grateful to have been a part of it.

What advice would you give other Post 11 players considering going to college and considering a college baseball career?  First, they need to work hard to gain the attention of schools and then when the decision comes around I would tell them to go with their gut. Find a place that fits you academically and socially and if you are able to play baseball there then that is probably a good fit. There are many great schools with great baseball programs. College baseball is hard no matter what division or league someone plays in and they should be happy with the whole experience. There is a lot of work that goes with being a college baseball player, but if you love the game, like me,  you just do what is necessary to keep playing the game.

Prediction – how many all-nighters do you think you’ll pull in your freshman year in college?  It's hard to tell now, but if I had to guess I would say quite a few and that will be rough, because I like to get a good night sleep. 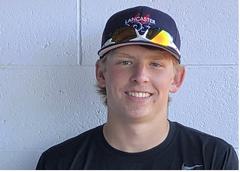